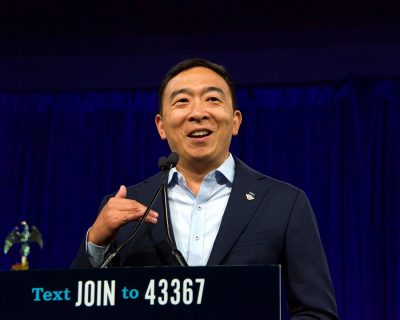 Yang in 2019, photo by Sheila_F/Bigstock.com

Andrew Yang is an American entrepreneur, philanthropist, author, lawyer, politician, and political commentator. He founded the non-profit organization and fellowship Venture for America. He formed the Forward party in 2021.

He was a candidate for the Democratic Party’s nomination for President of the United States in 2020, running on a platform of Universal Basic Income.

His parents, Nancy and Kei-Hsiung Yang, are Taiwanese, and met in the U.S. at college, having moved to the U.S. in the 1960s. His father worked in the research labs of IBM and General Electric, and his mother is a university systems administrator and artist. Andrew was raised in Westchester County, New York. He is married to Evelyn, with whom he has two children. The family attends a Reformed Church.

Source: Genealogy of Andrew Yang (focusing on his mother’s side) – https://www.geni.com