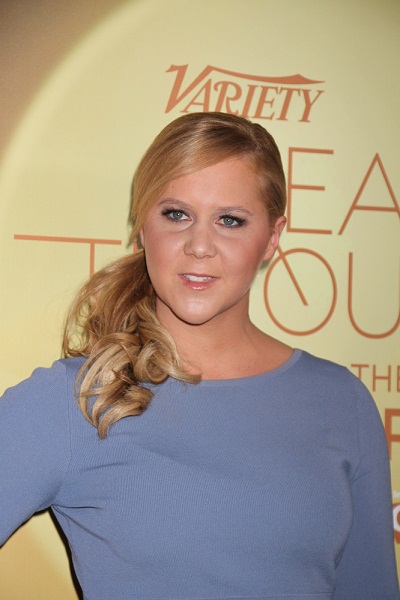 Schumer in 2014, photo by PrPhotos

Amy Schumer is an American comedian, actress, writer, and producer. She has starred in the films Trainwreck, Snatched, and I Feel Pretty, and on the show Inside Amy Schumer, among other works.

Amy is the daughter of Sandra Jane and Gordon David Schumer. She is married to chef Chris Fischer, with whom she has a son.

Amy’s father is from an Ashkenazi Jewish family (from Ukraine and Poland). Amy’s mother has English, German, and some Scottish and Welsh, ancestry, and is of Methodist background; she converted to Judaism when marrying her first husband, who was also Jewish.

Amy was raised Jewish, in Reform Judaism. She went to Hebrew School and had a Bat Mitzvah ceremony.

Amy’s maternal grandfather was Kenneth Hayden Jones (the son of Lawrence Elmore Jones and Mildred E. Shattuck). Kenneth was born in Massachusetts. Lawrence was the son of Charles Stevens Jones and Edith Lawrence Johnston. Mildred was the daughter of Minnie Theresa Tribou.

Amy’s maternal grandmother was Betty Jane Roth (the daughter of John Slater Roth and Georgia Catherine Dement). Betty was born in Ohio. John was the son of Harry Lamont Roth and Nancy Witt. Georgia was the daughter of Edward E. Dement and Frances/Francis Ellen “Fannie” Phillips.

While there are many Jewish Roth families, Amy’s Roth line is of non-Jewish German origin.