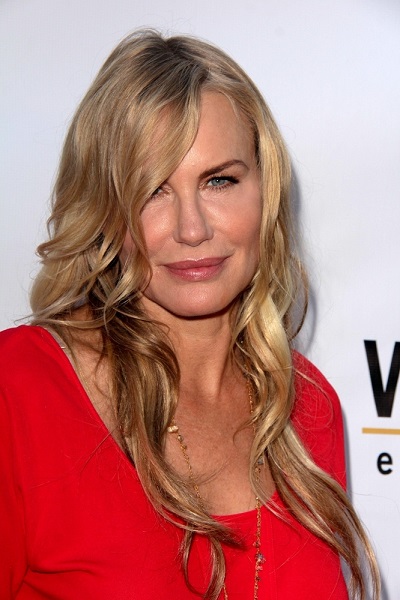 Hannah in 2013, photo by Prphotos.com

Daryl Hannah is an American actress and environmental activist. Her roles include Splash, Kill Bill, The Fury, and Reckless, among many others.

She is the daughter of Susan Jeanne (Metzger), a producer, and Donald Christian Hannah. Her stepfather was music journalist and music promoter Jerrold Wexler. Daryl is married to Canadian-born singer and songwriter Neil Young. Her sister is actress Page Hannah. Page is married to music producer Lou Adler.

Daryl’s paternal grandfather was James Andrew Hannah (the son of James Thompson Hannah and Mary Elizabeth Flahive). Daryl’s grandfather James was born in Illinois. Daryl’s great-grandfather James was Scottish, from a family from Wigtownshire, the son of John Hannah and Agnes McDowall. Mary Elizabeth was the daughter of Thomas J. Flahive, who was Irish, and of Mary Ann McHugh, who was of Irish descent.

Daryl’s paternal grandmother was Margaret Marie Olsen (the daughter of Christian N. Olsen and Hannah M. Simonsen). Margaret was born in Illinois, to a Danish father, from Aalborg, and a Norwegian mother.

Sources: Genealogy of Daryl Hannah (focusing on her father’s side) – http://worldconnect.rootsweb.ancestry.com