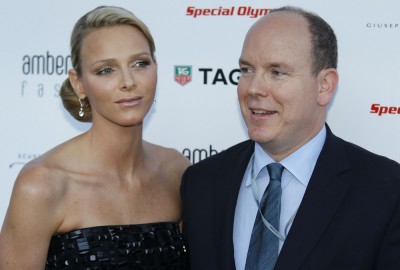 Albert II is the reigning monarch of the Principality of Monaco. He is the son of Rainier III, Prince of Monaco, and the American actress Grace Kelly. His siblings are Caroline, Princess of Hanover and Princess Stéphanie of Monaco. His uncle, John B. Kelly, Jr., was an Olympic rower, as was his maternal grandfather, John Brendan “Jack” Kelly, who had won three Olympic gold medals.

Albert II is married to Charlene, Princess of Monaco (Charlene Wittstock) (pictured above). He has five children: three with Charlene, Jazmin Grace Grimaldi, and Alexandre Grimaldi-Coste.

His father’s ancestry was French, one quarter Spanish-Mexican, small amounts of Belgian [Walloon and Flemish], Scottish, English, European Royal, and remote Italian. His mother was of Irish and German descent. He has Martinique-born and Haiti-born ancestors, of French descent.

Albert II’s maternal grandfather was John Brendan “Jack” Kelly (the son of John Henry Kelly and Mary Ann/Anne Costello). Albert II’s grandfather Jack was born in Philadelphia, Philadelphia, U.S. He owned a successful brickwork contracting company, was the Democratic Party nominee in the 1935 Philadelphia Mayoral election, and served on the Fairmount Park Commission and as National Director of Physical Fitness. Albert II is a great-nephew of Walter C. Kelly, a vaudeville comedian and actor, and George Kelly, a playwright.