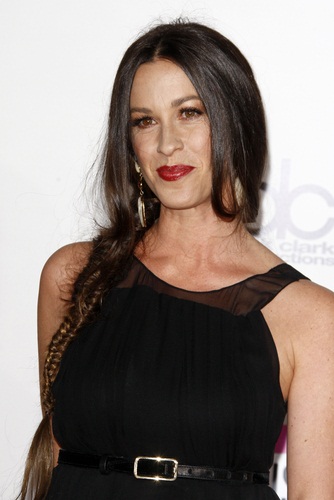 Alanis Morissette is a Canadian alternative rock singer, songwriter, record producer, and actress. She is also an American citizen.

Her father, Alan Richard Morissette, is of approximately three quarters French-Canadian and one quarter Irish ancestry. Her mother, Georgia Mary Anne (Feuerstein), is Hungarian, and appears to be of half Ashkenazi Jewish and half Hungarian descent. Her brother is kirtan and indie pop-rock musician, yoga instructor, therapist, and author Wade Morissette.

Alanis’s parents are both Catholic. Alanis was raised a Catholic.

Alanis is married to American rapper Souleye (Mario Treadway), with whom she has three children.

Alanis’s maternal grandfather was named Imre Feuerstein. Imre had a Catholic funeral. Alanis has stated (at 13:07) that she is of one quarter Jewish ancestry, which means that Imre likely was born Jewish.

Alanis’s maternal grandmother was Nadinia Gulyás (the daughter of Mihály Gulyás and Katalin Lauscher). Mihály was born in Debrecen, Hajdú-Bihar, Hungary, the son of György Gulyás and Liza Treba. Katalin was the daughter of Nándor Lauscher and Anna Nagy.

Genealogy of Alanis Morissette (focusing on her father’s side) – http://worldconnect.rootsweb.ancestry.com