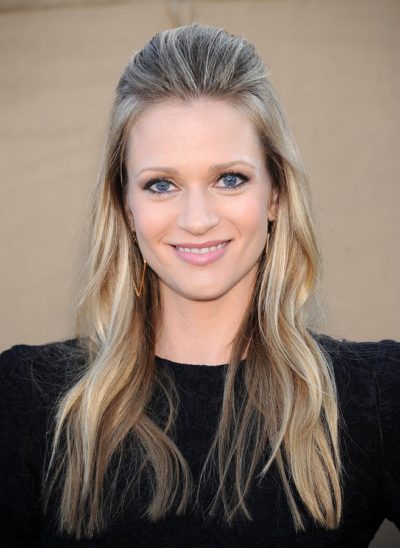 A. J. Cook is a Canadian actress. She is known for her roles on the show Criminal Minds and in the film Final Destination 2.

She was raised in Whitby, Ontario. A. J. is married to Nathan Andersen, with whom she has two children. A. J. was raised LDS (Mormon).

A. J.’s paternal grandmother was Hilda “Jean” Holland (the daughter of Charles Wesley Holland and Gladys Van Volkenburg/Volkenberg). Hilda was born in Cordova Mines, Peterborough, Ontario. Charles was the son of William Charles Holland, whose parents were English, and of Maude/Maud Katherine Rupert, whose father was also English. Gladys was the daughter of John Wesley Van Volkenburgh and Sarah Ann Reid.

A. J.’s maternal grandfather was Robert Earl Sayers (the son of Henry Sayers and Jane Isabel Waldie). Robert was born in Acton, Halton, Ontario. Henry was the son of James Sayers and Naomi/Naomie Trotter, whose father was born in New Jersey, U.S., to parents from Armagh, Northern Ireland. Jane was the daughter of Alexander Waldie, who was from Scotland, and of Margaret McGregor, who was also of Scottish origin.

A. J.’s maternal grandmother was Dorothy Catherine Roberta Wilson (the daughter of James Keith Wilson and Margaret Thornton). Dorothy was born in Kawartha Lakes Division, Ontario. James was the son of Lewis Wilson and Mary Keith, who was from Aberdeenshire, Scotland. Margaret was the daughter of Robert Thornton and Jane Malloch.

Genealogy of A. J.’s father (focusing on his father’s side) – http://worldconnect.rootsweb.ancestry.com