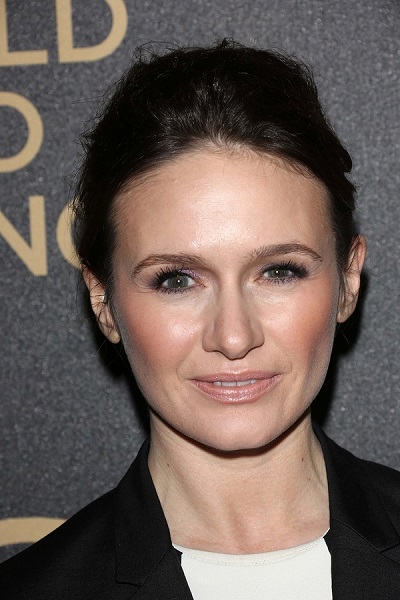 Mortimer in 2012, photo by s_bukley/Bigstock.com

Emily Mortimer is an English actress and screenwriter. Her roles include the films Scream 3, Lovely and Amazing, Howl’s Moving Castle, Match Point, The Pink Panther, Lars and the Real Girl, Chaos Theory, Harry Brown, City Island, Shutter Island, Cars 2, Our Idiot Brother, Hugo, The Sense of an Ending, The Bookshop, Mary Poppins Returns, and Relic, and television’s The Newsroom, Doll & Em, and The Pursuit of Love.

She is the daughter of Penelope and writer and lawyer John Mortimer (John Clifford Mortimer). Emily is married to American actor Alessandro Nivola, with whom she has two children, actors Sam Nivola and May Nivola.

Emily’s paternal grandmother was Kathleen May Smith (the daughter of Henry Bartlett Smith and Eleanor Langford). Kathleen was born in Warwick, Warwickshire, England. Henry was the son of Peter Smith and Louisa Catherine Squires. Eleanor was the daughter of Albert Frederick Langford and Mary Ann Emerson.

Emily’s maternal grandfather was William A. J. Gollop (the son of Charles Henry Gollop and Kate Anne Thorp). William was born in Paddington, London, England, and was a pig farmer. Charles was the son of Sarah. Kate was the daughter of William John Alfred Thorp and Kate Towerton.

Sources: Genealogies of Emily Mortimer (focusing on her father’s side) – https://www.geni.com
http://www.benedictheal.com