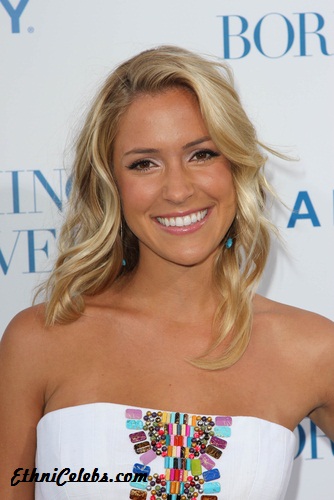 Kristin Cavallari is an American television personality, fashion designer, and actress. She is known for appearing on the MTV reality series Laguna Beach and The Hills. She has stated that she is a fan of reality series Jersey Shore, based on the lives of Italian-Americans, and that her favorite character is “The Situation.”

Kristin has three children with her former husband, football quarterback Jay Cutler. She has also been known as Kristin Cutler.

Kristin’s paternal grandfather was Henry Cavallari, Sr. (the son of Conrad Frank Cavallari/Cavillari and Adela/Adele Esposito/Esposti). Henry was born in New York, to Italian parents, from Fano, Province of Pesaro and Urbino, Marche. Conrad immigrated to the U.S. in 1903.

Kristin’s paternal grandmother was named Irma (the daughter of Peter and Angela). Irma’s parents were from Genoa, Liguria, Italy.

Kristin’s maternal grandfather was Edgar E. Eifrig (the son of The Rev. Charles William Gustave Eifrig and Marie Karolina Meyer). The Rev. Charles was born in Döbeln, Sachsen, Germany, and was a Lutheran minister. He was the son of Friedrich Wilhelm Eifrig. Marie was the daughter of Johann/John Christoph Meyer, who was born in Hanover, Lower Saxony, Germany, and of Marie Schroeder.

Kristin’s maternal grandmother was Mary Patricia Diehl (the daughter of Albert Fredrick Diehl and Emma G. Schmaltz). Mary was born in Ohio. Albert was the son of Christian Diehl, who was German, and of Mary Rautz. Emma was the daughter of William Albert Schmaltz and Matilda Sophia Conn.

Genealogy of Kristin Cavallari (focusing on her mother’s side) – http://familytreemaker.genealogy.com