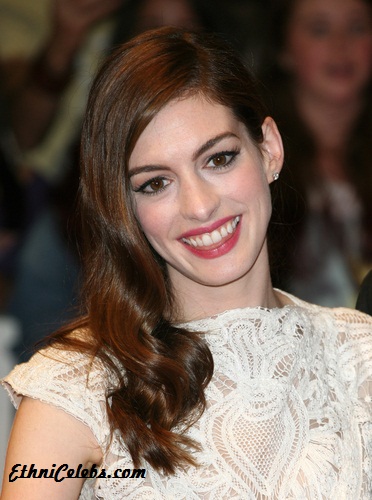 Anne Hathaway is an American actress, singer, and producer. She won the Academy Award for Best Supporting Actress for Les Misérables (2012). She became famous with her role in the Disney comedy The Princess Diaries, and has since starred in many prominent films, including The Devil Wears Prada, Rachel Getting Married, and The Dark Knight Rises.

Anne is the daughter of Kate McCauley (Kathleen Ann McCauley), an actress, and Gerald Thomas Hathaway, a lawyer. Anne is married to actor Adam Shulman, with whom she has two children.

Anne is of approximately 62.5% Irish ancestry. Anne’s father has Irish, French, English, and German ancestry. Anne’s mother is of Irish descent. Anne has said that she has roots in Cork and Donegal on her father’s side.

Anne stated (in an article on News.com.au) that she also has distant Native American ancestry. It is not clear if this ancestry has been verified/documented. If true, it could only be on her father’s side; her mother’s family were all recent Irish immigrants.

Anne has said that she has a very pale complexion because she tries to avoid being in the sun, as her family has a long and tragic history of skin cancer.

Anne’s paternal grandfather was Robert Earnest/Ernest Hathaway (the son of Pearl LeRoy Hathaway and Carrie Melinda Sensabaugh). Robert was born in Pennsylvania. Pearl was the son of James A. Hathaway and Emma Louisa Reed. Carrie was the daughter of Frederick Jay Sensabaugh and Myrtie F. W. Foster.