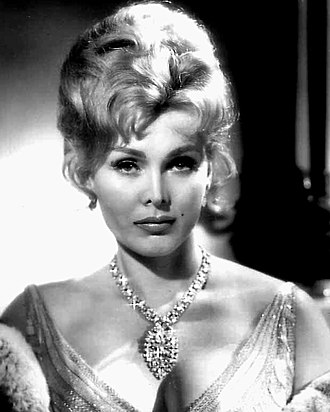 Zsa Zsa Gábor was a Hungarian-born American actress and socialite. She had leading roles in the films Lovely to Look At, We’re Not Married!, Moulin Rouge (1952), Lili, The Man Who Wouldn’t Talk, and Picture Mommy Dead. Zsa Zsa was crowned Miss Hungary in 1936.

Zsa Zsa was born in Budapest, Austro-Hungarian Empire, now Hungary. Her parents were both Jewish. Her father, Vilmos “Willie” Gábor (born Farkas Miklós Grün), was a soldier, and her mother, Jolie Gabor, Countess de Szigethy (born Janka Tilleman), was a socialite, jeweler, and memoirist; she received the title “Countess” as she was married to Count Odon Szigethy, until his death. Her mother’s family were jewelers who owned a jewellery shop known as “The Diamond House.”

Zsa Zsa was married to German-born entrepreneur Frédéric Prinz von Anhalt, until her death. She had a daughter, actress, photographer, and comedian Francesca Hilton, with her former husband, Conrad Hilton, who had founded the Hilton Hotel Chain. Zsa Zsa was thus the step-great-grandmother of socialites Paris Hilton and Nicky Hilton Rothschild.

Zsa Zsa was a first cousin, once removed, of Annette Lantos (née Tilleman), the wife of Tom Lantos, a Democratic politician, who was a U.S. congressman from California. Zsa Zsa’s grandfather Jónás Tilleman was a brother of Annette’s father, Sebastian Tillemann.