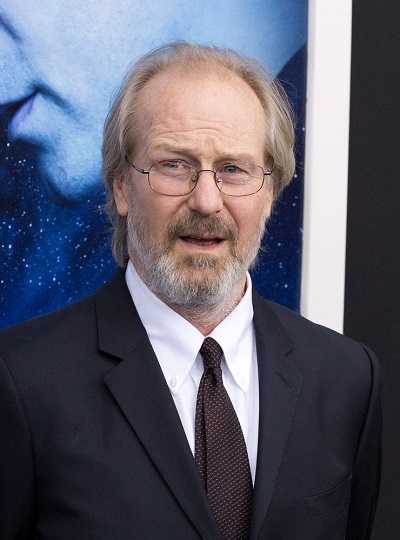 William Hurt is an American actor. He won the Academy Award for Best Actor for Kiss of the Spider Woman (1985). He has also starred in The Big Chill, Body Heat, and One True Thing, among many other dramatic roles.

William is the son of Claire Isabel (McGill), who worked at Time, Inc. and Alfred McChord Hurt, a diplomat. His stepfather was Henry Luce III, a son of magazine publisher Henry Luce, of Time, Life, Sports Illustrated, and Fortune magazines.

William’s paternal grandfather was William Fairleigh Hurt (the son of Napoleon Bonaparte Hurt and Alice Johnston). William’s grandfather William was born in Kentucky. Napoleon was the son of William Hurt and Mary Emma Hitt. Alice was the daughter of William Bear Johnston, who was born in Co. Derry, Ireland, and of Margaret Keturah Mayes, who had Scots-Irish/Northern Irish ancestry.

William’s paternal grandmother was Laura McChord (the daughter of Alfred Hynes McChord and Eunice Harlan). Laura was born in Kentucky. Alfred was the son of Robert Caldwell McChord and Laura Duvall Hynes. Eunice was the daughter of James Lawson Harlan and Letitia/Lettie Maxwell.

William’s maternal grandmother Catherine Anne Rogers (the daughter of Alexander Rogers and Isabel Bryden Bulman). Catherine was born in Minnesota. Alexander was the son of James Rogers and Martha Sampson. William’s great-grandmother Isabel was the daughter of Canadian parents, Robert John Bulman, who was born in Brampton, Peel Regional Municipality, Ontario, and Sarah Maria Barton, who was born in Hamilton, Hamilton Division, Ontario.

Genealogy of William’s father (focusing on his own father’s side) – https://www.ancestry.co.uk