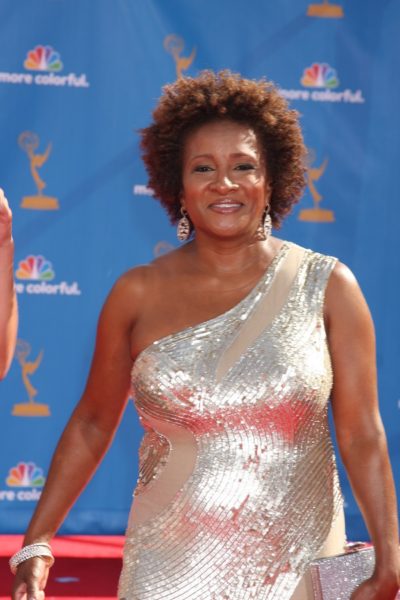 Sykes in 2010, photo by kathclick/Bigstock.com

Wanda is the daughter of Marion Louise (Peoples) and Harry Ellsworth Sykes, a U.S. Army colonel employed at the Pentagon. She is married to Alex Niedbalski, who is from France. The couple have two children.

Wanda’s paternal grandfather was named Luther Luke Sykes (the son of Joseph Sykes and Maggie). Luther was born in Virginia.

Wanda’s paternal grandmother was Magnolia Wilson (the daughter of Junius Wilson and Fannie Elliott). Magnolia was born in Virginia. Junius was the son of John Wilson and Rosa Francis.

Wanda’s maternal grandfather was named Allie Peoples (the son of Emma). Allie was born in Virginia or North Carolina.

A DNA test taken by the show Finding Your Roots with Henry Louis Gates, Jr. (2012) stated that Wanda’s genetic ancestry is:

The show traced Wanda’s ancestry to her matrilineal ninth great-grandmother, named Elizabeth Banks, who was a white indentured servant. Elizabeth’s daughter, Wanda’s ancestor, was Mary Banks, whose father was a black slave. It is one of the few cases of being able to trace an African-American family’s black genealogy as early as the 1600s. It was also stated that some of Wanda’s DNA matches to present-day Cameroon.