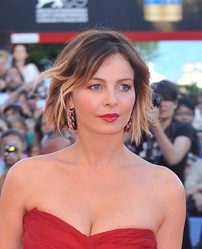 Placido in 2012, photo by Prphotos.com

Violante Placido is an Italian actress and singer. She has starred in The American, with George Clooney, and Ghost Rider: Spirit of Vengeance.

She was born in Rome. Her father, actor/director Michele Placido, was born at Ascoli Satriano, Apulia, into a poor family from Rionero in Vulture, Basilicata. Her mother, actress Simonetta Stefanelli, was also born in Rome, and is known for having played Michael Corleone’s first (Sicilian) wife in The Godfather. Violante has a son with Massimiliano D’Epiro.

Violante’s paternal grandfather was named Beniamino Placido. Beniamino was from Rionero in Vulture, Province of Potenza, Basilicata, Italy. He was said to be related to the brigand Carmine Crocco.