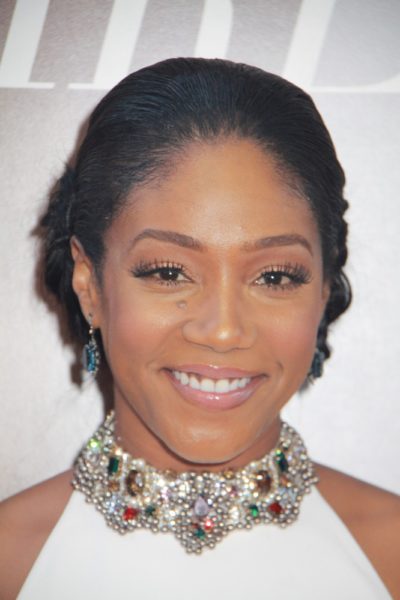 Tiffany Haddish is an American stand-up comedian, actress, and author. She has starred in the films Girls Trip, The Oath, Night School, The Kitchen, Bad Trip, and The Card Counter, and the series The Carmichael Show and The Last O.G., and has hosted Kids Say the Darndest Things, among many other works.

Her father, Tsihaye Reda Haddish, was Eritrean, a country that was once part of Ethiopia; he was an Eritrean Jew. Her mother, Leola (Wright), is American (African-American), and of the Jehovah’s Witness religion. Pictures of Tiffany with her father can be seen here and here.

A popular line in Tiffany’s biographies states that she is “as sexy as Halle Berry, as funny as Jim Carrey, raw like Richard Pryor with the comedic timing of Lucille Ball, smooth like Eddie Murphy, Jewish as Whoopi Goldberg, and hopes to someday have money like Oprah.” [Whoopi Goldberg is not actually Jewish]

Tiffany became a naturalized citizen of Eritrea on May 22, 2019, in a ceremony in the country.

As an adult, Tiffany became a practicing Jew. In 2019, re-connecting with her Jewish heritage, she had a formal Bat Mizvah ceremony. It was officiated by Rabbi Susan Silverman, the sister of comedian Sarah Silverman. Tiffany stated:

I’m Jewish by DNA… And because of my father, I want to honor him and our ancestors, and I want to do something that represents growth and maturity. And I want to teach. That’s what I’ve been put on this planet to do is teach, and Judaism is all about that.

Interview with Tiffany about her Jewish practice – https://time.com