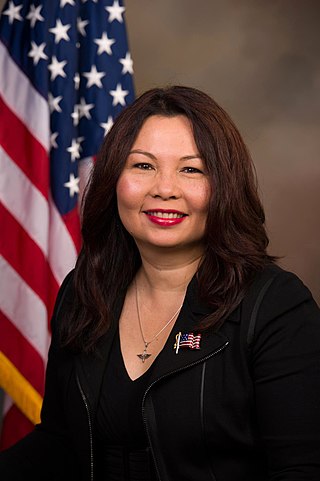 Tammy was born in Bangkok, Thailand, the daughter of Lamai Sompornpairin and Franklin Garthwright Duckworth. Her father was American, and had English ancestry. He was a veteran of the U.S. Army and U.S. Marine Corps. Her mother was of Chinese descent. A picture of Tammy’s parents can be seen here.

Her family moved throughout Asia during her youth, while her father worked for the U.N. They eventually settled in Honolulu, Hawaii, U.S., during her teenage years.

Her father’s ancestry traces back in the U.S. to before the Revolutionary War, in which her ancestors fought. Tammy herself is a war veteran.

Tammy is married to Major Bryan W. Bowlsbey, a signal officer. The couple has two children.

Tammy’s paternal grandfather was Joseph Franklin/Frank Duckworth (the son of Philip/Phillip Garthright Duckworth and Eliza Virginia Grove/Groves). Joseph was born in Maryland. Philip was the son of Aden C. Duckworth and Dorcas Ellen Wilt. Eliza was the daughter of John Galloway Grove and Hester Anne/Ann Clark.

Genealogy of Tammy Duckworth (focusing on her father’s side) – https://www.geni.com