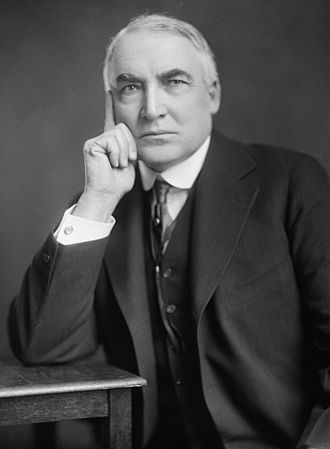 Harding c. 1920, Harris & Ewing collection at the Library of Congress

President Harding was the son of Phoebe Elizabeth (Dickerson) and Tryon Harding (George Tryon/Tyron Harding), who was a physician and businessperson. He was married to Florence Mabel (Kling), until his death. He had a daughter with his mistress Nan Britton.

President Harding’s paternal grandfather was Charles Alexander Harding (the son of George Tryon/Tyron Harding and Elizabeth Madison). Charles was born in Clifford, Susquehanna, Pennsylvania. George was the son of Amos Harding and Phoebe Tripp. Elizabeth was the daughter of William Madison and Mary Hooper.

President Harding’s maternal grandmother was Charity Malvina van Kirk (the daughter of William van Kirk and Deborah Watters). Charity was born in Pennsylvania, likely in Washington County. William was the son of Henry Van Kirk, Jr. and Sarah Johnson. Deborah was the daughter of Thomas Watters and Priscilla Wadden.