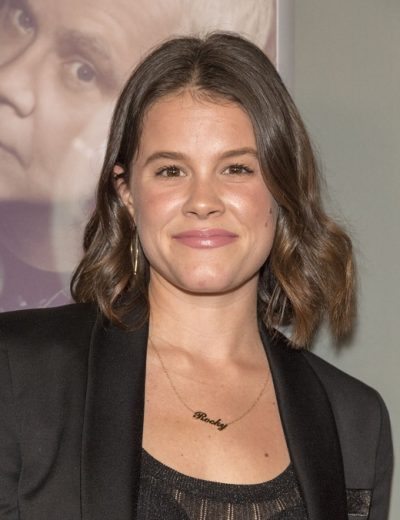 Sosie Bacon is an American actress. Her roles include the films Charlie Says and Smile, and television’s Here and Now, Mare of Easttown, and As We See It.

She is the daughter of actor and musician Kevin Bacon and actress and producer Kyra Sedgwick. Her paternal uncle is musician Michael Bacon, her maternal half-uncle is jazz guitarist Mike Stern, and her half-cousins are R&B singer George Nozuka, actor Philip Nozuka, musician and actor Justin Nozuka, and musician Henry Nozuka.

Sosie’s paternal grandfather was Edmund Norwood Bacon (the son of Ellis Williams Bacon and Helen Atkinson Comly). Edmund was born in Philadelphia, Philadelphia Co., Pennsylvania, and was a prominent urban planner, architect, educator, and author, who shaped the city of Philadelphia. Ellis was the son of Thomas Pryor Bacon and Annie Elizabeth Ellis. Helen was the daughter of Robert Comly and Lydia Townsend Atkinson.

Sosie’s paternal grandmother was Ruth Hilda Holmes (the daughter of Artemas H. Holmes, Jr. and Dorothy Frances Smith). Ruth was born in New York, New York, and was a teacher and liberal activist. Artemas was President of Street and Smith Publications, and a professional tennis player. He was the son of Artemas Henry Holmes and Lillian Stokes. Dorothy was the daughter of George Campbell Smith and Annie/Anne Kammerer Schmertz. George was the son of Francis Shubael Smith, whose mother was from an English family in the West Indies; and of Mary Jellett/Jellette Duff, whose parents were from Ireland. Sosie’s great-great-great-grandfather Francis Shubael Smith partnered with Francis Scott Street and started the publishing firm of Street & Smith. Their son, Sosie’s great-great-great-uncle Ormond Gerald Smith, was later its president.

Sosie’s maternal grandfather was Henry Dwight Sedgwick V (the son of Robert Minturn Sedgwick and Helen Peabody). Henry was born in Massachusetts, to a New England WASP family with deep roots in the area. Robert was the son of Henry Dwight Sedgwick III and Sarah May Minturn. Helen was the daughter of The Rev. Endicott Peabody, a minister, who founded the Groton School for Boys, and of Fanny/Frances/Fannie Peabody, who were born with the same surname. Sosie’s great-grandmother Helen Peabody’s brother, Sosie’s great-great-uncle, was Malcolm E. Peabody, who served as bishop of the Episcopal Diocese of Central New York, from 1942 to 1960. Sosie’s first cousin, twice removed, was Endicott Peabody, a Democratic politician, who was Governor of Massachusetts, from 1963 to 1965.

Sosie’s maternal grandmother was Patricia Ann Rosenwald (the daughter of James Benno Rosenwald and Dorothy T. Bleyer). Patricia was born in New York. James was the son of Bernard “Benno” Rosenwald, whose parents were German Jews, and of May/Mae Cordelia Cook, who was also of German Jewish descent. Dorothy was the daughter of Louis Bleyer, whose parents were Austrian Jews, and of Emma Moretta Hirsch, who was also Jewish.