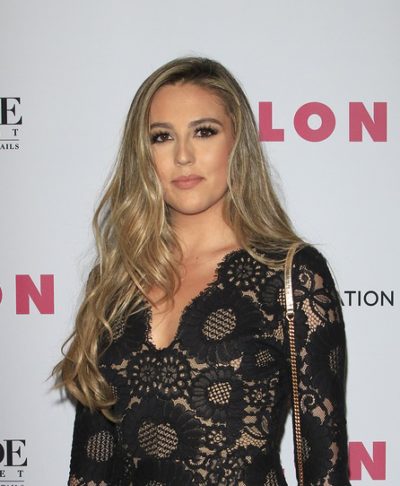 LOS ANGELES – MAY 12: Sophia Rose Stallone at the NYLON Young Hollywood May Issue Event at HYDE Sunset on May 12, 2016 in Los Angeles, CA Photo by kathclick/Bigstock.com

Sophia Rose Stallone is an American actress. She is the daughter of actor and filmmaker Sylvester Stallone and model, entrepreneur, and business owner Jennifer Flavin. Among her siblings is actor Sage Stallone and internet personality, model, and actress Sistine Stallone. Her uncle is actor Frank Stallone.

Sophia’s paternal grandmother is Jackie Stallone, an astrologer, dancer, and women’s wrestling promoter (born Jacqueline Frances Labofish, the daughter of John Paul Labofish and Jeanne Victoria Adrienne Anne Clérec). Jackie was born in Washington, D.C. Sophia’s great-grandfather John was born in Williamsport, Pennsylvania, the son of Charles Schachan/Shashan Labofish/Labofisz and Rose Ethel Lemlich/Lamlec/Lamletz/Lemletz. On census records and in other documents, Charles and Rose were listed as born in Germany most of the time, or in Russia, some of the time. Their language was usually listed as “German.” Sophia’s great-grandmother Jeanne was born in Brittany, France, to French Catholic parents, Louis Victor Clérec and Marie Pauline Rodrigue, and was of Breton ancestry.

Sophia’s maternal grandfather was Donald Hugh Flavin (the son of Hugh Edward Flavin and Theresa Wyrzykowski/Wyrsykowski). Donald was born in Minnesota. Sophia’s great-grandfather Hugh was the son of John Bernard Flavin, whose parents were Irish, and of Julia A. McGuire, who had Irish and French-Canadian ancestry. Julia’s maternal great-grandmother has been described as Ojibwe. Her surname is said to be Sauteuse, like the Saulteaux tribe. It is not clear if this is accurate. Sophia’s great-grandmother Theresa was born in Minnesota, to a Polish father, John Wyrzykowski, and of a German mother, Theresa A. Graf.

Sophia’s maternal grandmother is Shirley Mae Knudsen (the daughter of Thorwald Walter Knudsen and Mabel Olga Bergeson). Thorwald was the son of Danish parents, Knud Carl Knudsen, from Skeby Sogn, and Kirsten “Carrie” Larsen. Mabel was the daughter of Hans Augustinus Hansen, who was born in Gjerpen, Norway, and of Alma Christina Olson, who was born in Trollhättan, Sweden.

Genealogy of Sophia’s father (focusing on his father’s side) – http://geneasud.com

Genealogies of Sophia’s maternal great-great-great-grandmother, Anne/Ann Eliza/Angeline Perigo (focusing on her own mother’s side) – http://www.genealogy.com
http://wc.rootsweb.ancestry.com