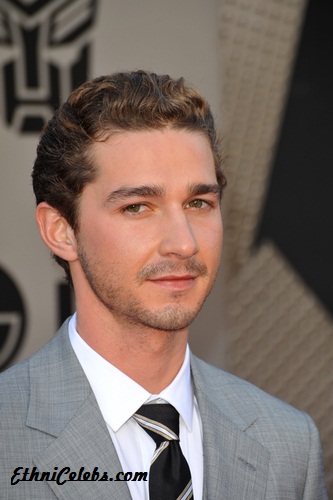 Shia LaBeouf is an American actor, director, and performance artist. He is known for his roles in the films Disturbia, Transformers (the first three), and Indiana Jones and the Kingdom of the Crystal Skull, among many others.

Shia is the son of Shayna (Saide) and Jeffrey LaBeouf. Shia’s father is of half Cajun [French] and half British Isles [English, Northern Irish] descent, and from a Christian background. Shia’s mother is Jewish, of Polish Jewish and Russian Jewish descent. Shia’s first name, Shia, is Hebrew for “a gift from God.” Shia’s last name is French, roughly meaning “the beef.” Shia was both baptized and raised Jewish, having a Bar Mitzvah ceremony. He has described himself as Jewish.

Shia’s paternal grandfather was Dewey LeBoeuf (the son of Maurice Joseph Lebouef and Clemence Marie Chauvin). Dewey was born in Louisiana, and was a Cajun. Maurice was the son of Hermilien Joseph “Emilien”/Emelien Lebouef and Cecilia/Cecile Hebert. Clemence was the daughter of Arthur Anatole Chauvin and Adeline Thibodeaux.

Shia’s maternal grandfather was Szaja Yeshayhu “Sam”/Shia Saide (the son of Nochim/Nochum Mendel “Max” Zajac/Zajenc/Saide and Chana “Anna” Slowa/Starynsky). Szaja was a Polish Jew, who was born, c. 1913, in Białystok. He moved to the United States in 1930. He was a comedian, performer, and artist. Max was the son of Benjamin Zajac/Zajnc/Zabludowsky and Tauba/Tobey Jasinowska/Jasienowska. Chana was the daughter of Sam/Shalom Starinsky and Belle Gurwitz, who were from Grodno, Belarus. Shia’s grandfather also had roots in Austria.