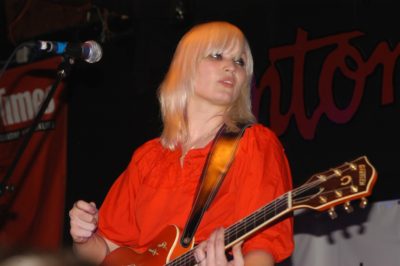 Sharin Foo is a Danish singer, songwriter, and musician. She is part of the indie rock duo The Raveonettes, with Sune Rose Wagner, in which Sharin sings, as well as plays the guitar and bass.

Sharin’s father is musician Kim Tai Foo, who played in the Danish folk-rock band Djursland Spillemænd. Her sister, Louise, is also a musician and singer. They were raised in a hippy commune. Sharin has a daughter with her former husband, American musician and songwriter Greg Edwards, of experimental rock band Autolux.

I don’t look too Chinese. I have all the Scandinavian colors, but I’ve got the Chinese nose and the eyes. My grandfather came from a tiny little three-house village in China –— he came to Denmark and had all these girlfriends, and he liked it so much that he had to stay. He started the first Chinese restaurant in Copenhagen. My father is totally Danish, but he looks Chinese.