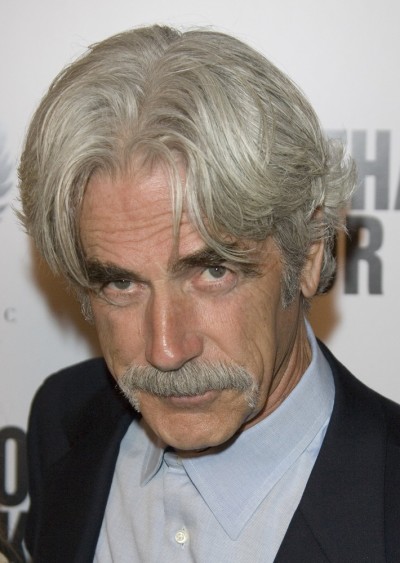 Elliott in 2006, photo by Prphotos

Sam Elliott is an American actor. His roles include the films Frogs, The Legacy, Gettysburg, Tombstone, The Contender, Hulk, Up in the Air, I’ll See You in My Dreams, and A Star is Born, and the shows Justified and 1883, among many other works.

He is the son of Glynn Mamie (Sparks), a teacher, and Henry Nelson Elliott, who was a predator control specialist for the Department of the Interior. His parents were both from Texas. Sam is married to actress Katharine Ross, with whom he has a daughter.

…my family has deep roots in Texas. One of my ancestors was a surgeon at the Battle of San Jacinto with Sam Houston… It was always a thrill when we got [to El Paso, during his childhood]. My family was a fun bunch to be around. The women cooked great Mexican food. Every time we went to El Paso, we walked across the bridge to Juárez… My mother’s family, the Sparks family, grew up in a cabin with a dirt floor, but my mom said they never knew that they were poor. The Sparks girls were all beauties. My mother was a top athlete at UTEP in basketball, volleyball and tennis. The day after she graduated, my parents moved to Marfa and my sister was born there, but I was born in California.

Sam’s great-great-great-uncle, Edward F. Mitchusson, was a doctor who died at the Alamo.

Sam’s maternal grandmother was Zora/Zorah Ada/Ida Pope (the daughter of John Marshall Pope and Lucy/Lucie Ann Whatley). Zora was born in Texas. John was the son of Silas Pope and Edna/Edney Griffin. Lucy was the daughter of William Hardy Whatley and Sarah “Sally” Lee.

Genealogy of Sam Elliott (focusing on his father’s side) – https://www.geni.com

Genealogy of Sam’s maternal great-grandfather, Samuel D. “Sam” Sparks (focusing on his own father’s side) – http://worldconnect.rootsweb.ancestry.com