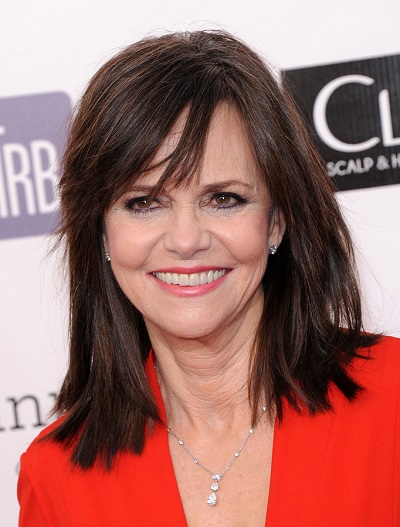 Field in 2013, photo by DFree/Bigstock.com

Sally Field is an American actress and director. She has twice won the Academy Award for Best Actress, for Norma Rae (1979) and Places in the Heart (1984). She is also known for her roles in the films Stay Hungry, Smokey and the Bandit, Absence of Malice, Murphy’s Romance, Punchline, Steel Magnolias, Mrs. Doubtfire, Forrest Gump, Hello, My Name Is Doris, and Lincoln, and on television’s Gidget, The Flying Nun, Sybil, and Brothers & Sisters, among many other works.

She is the daughter of Richard Dryden Field and actress Margaret Field (born Margaret Joy Morlan). She is a descendant of William Bradford, who arrived in the U.S. on the Mayflower in 1620. Sally has three children, one with her former husband Alan Greisman; and two with her former husband Steven Craig, novelist Peter Craig and actor and director Eli Craig.

Her brother is physicist and academic Richard D. Field, and her half-sister is assistant director Princess O’Mahoney. Princess is the daughter of Sally’s mother and stepfather, actor and stunt person Jock Mahoney.

Sally’s maternal grandmother was Joy Beatrice Bickley/Bickeley (the daughter of James Luther Bynum and Redonia Ethel Glazner). Joy was born in Alabama, and was raised by her own stepfather, L. Bickley. James was the son of Tapley Dennis Bynum and Sarah/Sally E. Nichols. Redonia was born in Alabama, the daughter of John Madison Glazner and Edna Wilson.

A DNA test taken by the show Finding Your Roots with Henry Louis Gates, Jr. (2014) stated that Sally’s genetic ancestry is:

In his 2016 book about the show, Finding Your Roots, Season 2: The Official Companion to the PBS Series, Henry Louis Gates, Jr. wrote that 67.1% of Sally’s European ancestry was from the British Isles, with smaller amounts from France, Germany, Scandinavia, Finland, Eastern Europe, and Southern Europe.

Genealogies of Sally Field (focusing on her father’s side) – http://worldconnect.rootsweb.ancestry.com
http://www.wikitree.com