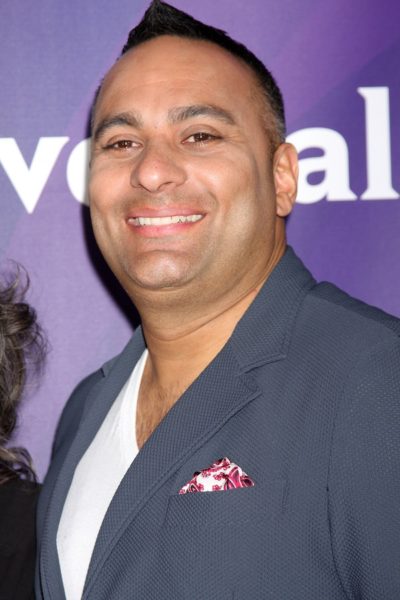 Peters in 2014, photo by kathclick/Bigstock.com

Russell Peters is a Canadian comedian and actors.

Russell is the son of Maureen Christina and Eric Reginald Peters, both Anglo-Indian, both of mixed Indian and English descent. His father, who was born in Bombay, was Anglican, and his mother, who was born in Calcutta, was Catholic, and Russell was raised in his mother’s Catholic faith. Russell grew up in Brampton, Ontario. He has a daughter with his former wife Monica Diaz.

Both of my parents are Anglo-Indian. Both of their parents were Anglo-Indian, and before that one of their great-grandfathers or great-great-grandfathers was British, Welsh, Scottish or Irish – one of those ishes. That’s what it is to be an Anglo-Indian. Somewhere in your genes is a British father and an Indian mother. Anglo-Indians, or AI’s, mixed with the British when they occupied India. That’s why my name is Russell Peters instead of something you’d be more likely to expect for a guy who looks like me, both of whose parents were born in India. Anglo-Indians come in all shades – from blond-haired and blue-eyed to dark-skinned with very traditional “Indian” features. Anglo-Indians are a very small, unique community as well as a dying one, a remnant from the Raj.

Russell’s maternal grandmother was named Sheila (the daughter of Jessie).