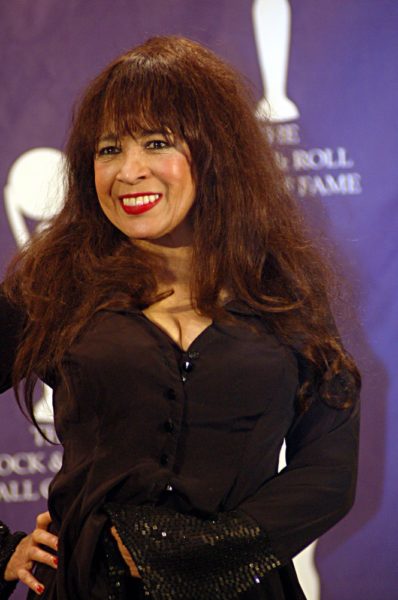 Ronnie Spector was an American rock and roll and pop music singer. She fronted the girl group The Ronettes, or Ronnie and the Relatives, with her sister Estelle Bennett and cousin Nedra Talley. The group is famous for their hits, “Be My Baby,” “Baby, I Love You,” “The Best Part of Breakin’ Up,” and “Walking in the Rain.” Ronnie was also known for her single “So Young.” Ronnie was billed under other names, Veronica Spector, Ronnie Bennett, and Ronnie Greenfield, and nicknamed the “Bad Girl of Rock and Roll.”

Ronnie was born Veronica Yvette Bennett in New York City, the daughter of Beatrice (Mobley) and Louis Albert Bennett. Her parents were both black, as were her grandparents. Her father was born in Georgia, and her mother was born in Florida. While her father is sometimes described as having been of Irish descent, and her mother as being of part Cherokee Native American ancestry, it is not clear if any Irish and/or Cherokee ancestry has been verified for Ronnie.

Ronnie and her sister Estelle (1941–2009) were encouraged to sing by their large family, as was their cousin, Nedra, who was of African-American and Puerto Rican descent.

Ronnie was married to Jonathan Greenfield, her manager, until her death. She had three children with her former husband, record producer, musician, and songwriter Phil Spector; and two children with Jonathan. She largely used Phil’s name professionally.

Ronnie’s paternal grandmother was Ethel Mae McIver (the daughter of Byron Julian McIver and Margaret/Maggie J. Weber). Ethel was born in Georgia. Byron was the son of Byron McIver and Elsie Monroe. Margaret was the daughter of Jacob Webber and Lotta.

Ronnie’s maternal grandfather was John F. Mobley (the son of Peter Mobley and Elizabeth Pipkin). John was born in Florida. Elizabeth was the daughter of Mary.

Ronnie’s maternal grandmother was named Susie Parrish (the daughter of James B. Parrish and Maria). Susie was born in Florida. James was the son of Abraham Parrish and Elsey.