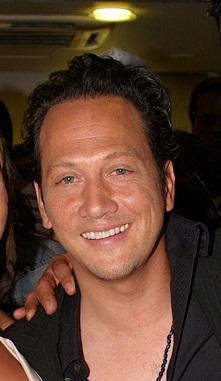 Schneider in 2005, image via Michelle Cop/Bigstock.com

Rob Schneider is an American actor, comedian, writer, and director. He has starred in Deuce Bigalow: Male Gigolo and The Hot Chick, among other films.

Rob is the son of Pilar M. (Monroe) and Marvin Schneider. His father was Ashkenazi Jewish (from a family from Poland and Russia). His maternal grandfather was an American, who had English and Scottish ancestry, and his maternal grandmother was Filipino.

Rob is married to television producer Patricia Azarcoya Arce, with whom he has two children. Rob is also the father of musician and actress Elle King, with his former wife, model London King. His brother is producer John Schneider.

Rob’s paternal grandmother was named Ann Molly Hoffman (the daughter of Harry Hoffman). Ann was a Jewish emigrant from Russia.

Rob’s maternal grandfather was Ulysses Stanley Monroe (the son of Oscar Wood Monroe and Ada Fuller). Ulysses was born in Berlin, Ottawa, Michigan, and had English, and some Scottish, ancestry. Oscar was the son of William Monroe and Mary A. Stanley, who was Canadian. Ada was the daughter of Lafayette Fuller, from New York, and of Harriet Keal, whose own parents were English.

Genealogy of Rob Schneider (focusing on his father’s side) – https://www.geni.com

Genealogy of Rob’s maternal great-great-great-grandfather, Isaac W. Stanley (focusing on his own mother’s side) – http://wc.rootsweb.ancestry.com

Genealogy of Rob’s maternal great-great-grandfather, Lafayette Fuller (focusing on his own mother’s side) – http://wc.rootsweb.ancestry.com