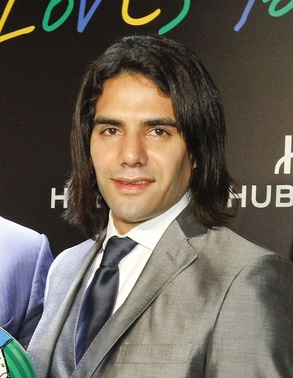 Falcao in 2014, photo by Prphotos.com

Ethnicity: Colombian, as well as one eighth English

Radamel Falcao is a Colombian professional footballer. He plays as a forward. He is nicknamed “El Tigre” and “King of the Europa League.”

His father was professional footballer Radamel García (Radamel Enrique García King). A picture of Radamel and his father can be seen here. Radamel was named after the 1980s Brazil national team, Internacional, and the Roma player Paulo Roberto Falcão.

Radamel is married to Argentinian singer Lorelei Taron, with whom he has three children.

Radmael’s paternal grandmother is named Denis Elvira King (the daughter of George/James King and Juliana). Radamel’s great-grandfather George, who was English, emigrated from the North Yorkshire village of Burn, near Selby, in 1932, to work as an accountant for the United Fruit Company in Colombia. George married a Colombian woman, Juliana.