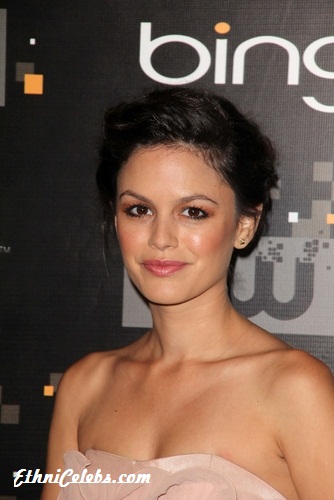 Rachel Bilson is an American actress. She is known for starring on the series The O.C. and in the movies The Last Kiss and Jumper.

She is the daughter of Janice, a sex therapist, and Danny Bilson, a writer and director. Rachel’s father is Jewish, from a family that emigrated from Lithuania, Russia, and Poland. Rachel’s mother, who was raised Catholic, is of Italian descent.

Rachel has a daughter with her former partner, Canadian-born actor and producer Hayden Christensen.

Rachel’s paternal grandfather was Bruce Bilson, a director (the son of George R. Bilson and Hattie Dratwa). Bruce was born in New York. George Bilson, a director, producer, and screenwriter, was born in England; George’s father, Harris “Harry” Bilson, was a Jewish emigrant to England, from either Kaunas, Lithuania or Russia, while George’s mother, Rachel’s great-great-grandmother Sarah Ettie/Etty/Lewis Rhudiminsky/Ruddaminsky, was born in England, to Russian Jewish parents, Lewis Ber Leyb Rhudiminsky/Ruddaminsky and Fannie/Annie Abraham Harris Vigdolsky. Harris and Sarah later moved to Brooklyn, New York. Rachel’s great-grandmother Hattie Bilson, a screenwriter, was born in New York, the daughter of Abraham Dratwa and Lena Skornik, who were Jewish emigrants from Russia/Poland, with Lena having been born in Kalish.

Rachel’s maternal grandfather was Alfredo/Alfred Thomas Stango (the son of Antonio/Anthony Stango and Antonetta Patrizio). Alfredo was born in Pennsylvania, to Italian parents. Antonio and Antonetta were from Castelluccio Valmaggiore, Province of Foggia, Apulia.

Sources: Genealogy of Rachel Bilson (focusing on her father’s side) – https://www.geni.com