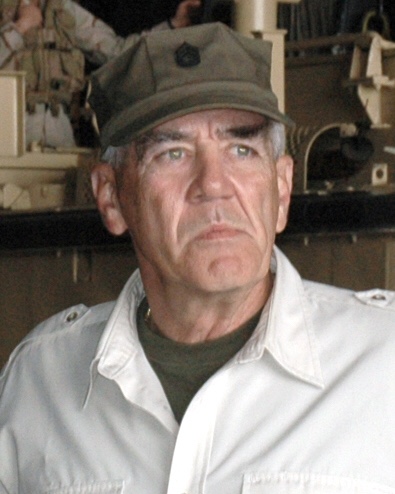 R. Lee Ermey was an American actor and U.S. Marine. He was known for his roles in Full Metal Jacket and the Texas Chainsaw Massacre series.

R. Lee was the son of Betty Jane (Pantle) and John Edward Ermey. He was raised in Kansas City, Kansas and Zillah, Washington. He was married to Nila, until his death, with whom he had four children. Nila is Filipino, and R. Lee met her while he was studying in the Philippines.

R. Lee’s paternal grandfather was Ira Edward Ermey (the son of Edward Christian Ermey and Adda/Addie A. Roderick). Ira was born in Kansas. R. Lee’s great-grandfather Edward was the son of Christian Columbus Ermey and Susan Nelle Beard. Adda was the daughter of John Roderick and Amorett Eliza Longmire.

R. Lee’s paternal grandmother was Ethel Alice Stout (the daughter of John Franklin Stout and Emma Dee Batesel/Batesell). Ethel was born in Missouri. John was the son of Wilson Stout and Alice Ann Foreman. Emma was the daughter of Jacob Alexander Batessel/Batesel and Mary Ann Pendleton.

Sources: Genealogy of R. Lee’s father (focusing on his own father’s side) – https://www.ancestry.com

Genealogy of R. Lee’s maternal great-great-grandfather, Joseph Lanning (focusing on his own father’s side) – https://www.ancestry.com.au