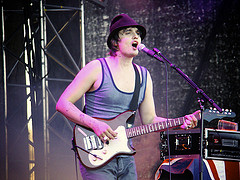 Pete Doherty is a British musician, songwriter, poet, writer, actor, and artist. He is a member of the rock band The Babyshambles.

Pete has a son with singer and songwriter Lisa Moorish; and a daughter with South African model Lindi Hingston.