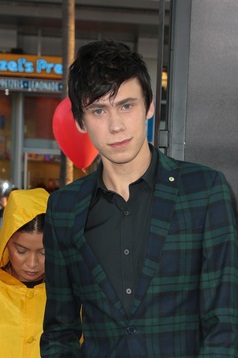 Teague in 2017, photo by Prphotos.com

Owen Teague is an American actor. He is known for his roles in the films Every Day, It, and I See You, among others.

Owen’s paternal grandfather was Burton William Teague (the son of William Thomas Teague and Bertie/Bert Mae Bardo). Burton was born in Oregon, and was an author. Owen’s great-grandfather William was born in California, the son of an English father, Arthur Gordon Teague, from Torquay, Devon, and of an American mother, Eunice Augusta Whipple, from Illinois. Bertie was born in California, the daughter of Levi Bardo and Jane Miller.

Owen’s maternal grandmother was Phyllis Marjorie Bredt (the daughter of Charles Henry Bredt and Viola B. “Pinky” Robert/Roberts). Phyllis was born in Ohio. Charles was born in Ohio, the son of Gustave/Gustav L. Bredt, whose parents were from Alsace-Lorraine, France, and Switzerland, respectively, and of Lillian Adalie “Lille” Bourquin/Bourguin, whose parents were born in France, and were ethnic French. Viola was born in Michigan, the daughter of Emma Ehters.