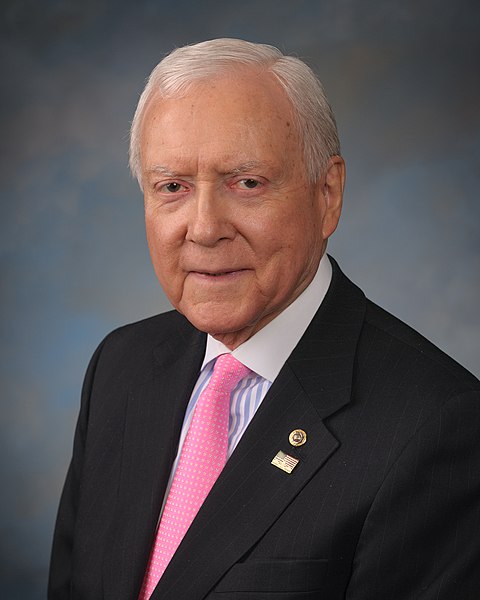 Orrin was the son of Helen Frances (Kamm) and Jesse Hatch. His maternal grandfather was from a Swiss family, of Swiss-German descent. Much of the rest of Orrin’s ancestry was Colonial American (largely English).

He was married to Elaine Hansen, until his death, with whom he had six children. His brother, Jesse Hatch, a U.S. Army Air Force nose turret gunner with the 725th Bombardment Squadron, was killed on February 7, 1945 when the B-24 he was aboard was shot down over Austria.

He was a member of the LDS faith.

Orrin’s paternal grandfather was Josephus Hatch (the son of Jeremiah Hatch and Louisa Pool/Poole Alexander). Josephus was born in Utah. Jeremiah was the son of Hezekiah Hatch and Aldura Sumner. Louisa was the daughter of Alvah Alexander and Phoebe Houston.

Orrin’s paternal grandmother was Martha Luella Thomas (the daughter of Benjamin Marion Clark Thomas and Sarah Ellen Sharp). Martha was born in Idaho. Benjamin was the son of Elija/Elijah Alexander Thomas and Melissa Davis. Sarah was the daughter of Norman Sharp and Martha Jane Sargent/Sergeant.

Orrin’s maternal grandmother was Effie Mabel Caldwell (the daughter of Robert Long Caldwell and Juliet Smith). Effie was born in Illinois. Robert was the son of David B. Caldwell and Nancy Hudelson/Huddleston Crawford. Juliet was the daughter of William R. Smith and Eliza Carlock.