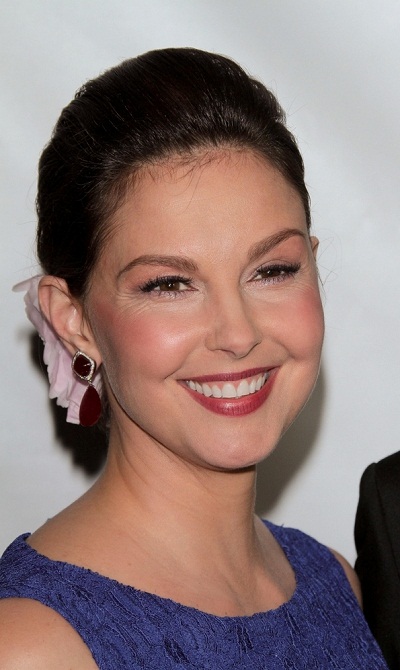 Ashley Judd is an American actress and political activist. She is the daughter of Michael Charles Ciminella and singer Naomi Judd (Diana Ellen Judd). Her maternal half-sister is singer Wynonna Judd. Her paternal grandfather was of Sicilian/Italian descent. Her other ancestry is English, with smaller amounts (to varying degrees) of Scottish, Irish, German, Welsh, and Swiss-German.

Ashley’s paternal grandfather was Michael Lawrence Ciminella (the son of Vincenzio “James” Ciminella and Jennie Orlando). Michael was born in Westfield, Chautauqua, New York, to Italian parents. Vincenzo was the son of Salvatore Ciminello and Maria Fasone, who were born in Vicari, Province of Palermo, Sicily, Italy. Jennie was the daughter of Joseph Orlando and Mary.

Ashley’s maternal grandfather was Charles Glen Judd (the daughter of Roy Ogden Judd and Sally/Sallie Ellen Moore). Charles was born in Kentucky, to Kentucky-born parents. Roy was the son of James Oliver Moore and Mary Jane Judd. Sally was the daughter of John Crittenden Moore and Florence Ellen Curnutte.

Ashley’s maternal grandmother was Pauline Ruth Oliver (the daughter of Howard Waverly Oliver and Edith Mae Burton). Pauline was born in Ohio, to a Virginia-born father and an Ohio-born mother. Howard was the son of David Norman Oliver and Matilda Sofia Weichmann. Edith was the daughter of Edward Lee Burton and Cora Lee Johnson.

“The Silence Breakers” won Time Magazine’s Person of the Year for 2017, women speaking out about sexual harassment/abuse. Ashley was one of six persons chosen to represent that title on the magazine’s cover, along with Isabel Pascual, Adama Iwu, Susan Fowler, Taylor Swift, and a woman who chose to remain anonymous.

Information about Ashley’s appearance on the genealogy show Who Do You Think You Are? (2011) – http://ancestraldiscoveries.blogspot.ca