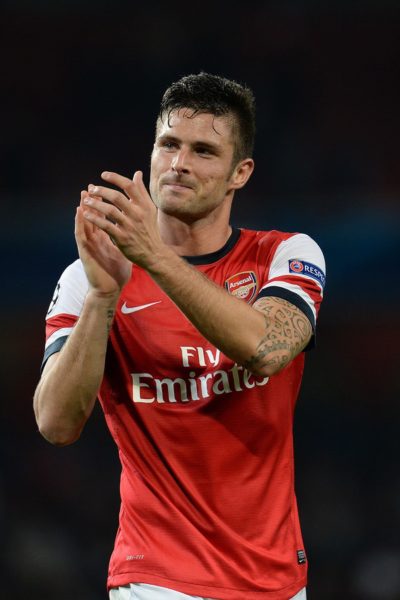 Giroud in 2013, photo by sportsphotographer.eu/www.bigstockphoto.com/

Olivier Giroud is a French professional footballer. He plays as striker for Italian Serie A club Milan and the France national team.

Olivier is the son of Viviane Arnaud-Goddet and Denis Giroud. He is of Italian descent through his grandmothers. He was raised in Froges, close to Grenoble. His brother, Romain, was also a footballer. Olivier is married to Jennifer, with whom he has a daughter.

Olivier’s patrilineal line can be traced to Félix Giroud, who was born, c. 1670, in Saint-Vincent-de-Mercuze, Isère, France, and to Félix’s wife, Virginie Burnoud.

Olivier’s paternal grandfather is Henri Giroud (the son of Louis Giroud and Marguerite Marie Aimée Vernet). Louis was the son of Rémy Giroud and Marie Adeline Poncet-Montauge. Olivier’s great-grandmother Marie Aimée was the daughter of Antoine Vernet and Clotilde Michelon.

Olivier’s maternal grandmother was Antonia Gaiatto (the daughter of Emilio Gaiatto and Térèsa Segatto). Emilio was born in Cinto Caomaggiore, Venice, Venezia, Italy, to parents whose surnames were Gaiatto and Delle Vedove.