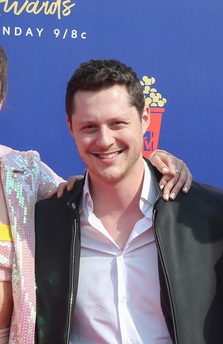 Noah Reid is a Canadian actor and musician.

His parents, Doreen and Stuart Reid, are visual artists. His sister, Thea Reid, is also an artist. He is a dual citizen of Canada and the U.S. His father is Canadian, of Northern Irish, Scottish, English, and Irish descent. His mother was raised in California, the daughter of Bulgarian immigrants.

Noah’s paternal grandfather was W. Creighton Reid (the son of Wilfred/Wilfrid George Melvell Reid and Cora May Brandon). W. Creighton was born in Wingham, Ontario. Noah’s great-grandfather Wilfred was the son of John Agnew Reid, who was born in Huron, Ontario, to parents from Ireland, with his father being from County Sligo and his mother having roots in County Tyrone; and of Catherine Sarah “Kattie” Millikin/Milikin. Noah’s great-grandmother Cora was the daughter of Thomas Sharpe/Shorp Brandon and Mary Creighton, who were the children of parents from Ireland, with the Brandon side at least having roots in County Fermanagh.

Noah’s paternal grandmother was Isabel McKinlay Oliver (the daughter of The Rev. George Wilfred/Wilfrid Oliver and Mary Caroline/Carolyn Isabelle/Isabella Gosnell). The Rev. George’s brother, Noah’s great-great-uncle, Dr. Edmund H. Oliver, was a Presbyterian and United Church of Canada minister, chaplain, and educator. He was a Moderator of the United Church of Canada, from 1930 to 1932. Noah’s great-grandfather The Rev. George was the son of George Wilfred Oliver and Rhoda Elizabeth Stark/Stork, whose father was from Strathclyde, Scotland and whose mother was from Kent, England. Noah’s great-grandmother Mary was the daughter of Henry Gosnell, whose father was from Cork, Ireland and whose mother had roots in Ireland and England; and of Belle/Isabelle/Isabella/Isabel McKinlay/McKinley, whose parents were Scottish.

Noah’s maternal grandmother was Emilia Ratcheva (the daughter of Bocho Ratchev and Teodora Ratcheva). Emilia was Bulgarian. Teodora was the daughter of Mito Stoycoff and Jordana Tzokova.

Genealogy of Noah’s paternal great-grandfather, Wilfred/Wilfrid George Melvell Reid (focusing on his own father’s side) – https://www.findagrave.com