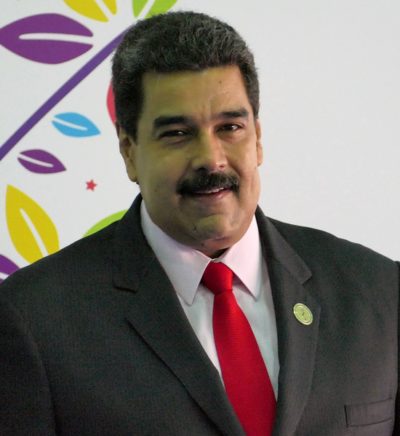 Maduro in 2016, photo by Golden Brown/Bigstock.com

Ethnicity: Venezuelan and Colombian [both including African, Indigenous, and Spanish], Sephardi Jewish

He is the son of Teresa de Jesús Moros, a Colombian, from Cúcuta, and Nicolás Jesús Maduro Garcia, a Venezuelan trade unionist. He is married to lawyer and politician Cilia Flores, who has been President of the National Assembly, from 15 August, 2006 to 5 January, 2011, and Attorney General of Venezuela, from 25 January, 2012 to 11 March, 2013. He has a son, politician Nicolás Maduro Guerra, with his former wife Adriana Guerra Angulo.

He was raised Catholic. He also follows the teachings of guru Sathya Sai Baba.

Nicolás’ paternal family ancestry is said to be of part Sephardi Jewish origin. They are said to trace their migration to Venezuela from Curaçao, and prior to that Holland (Netherlands), ultimately coming from the Netherlands’ community of Spanish and Portuguese Jews (i.e. Western Sephardi).

Nicolás’ maternal grandfather was Pablo Antonio Moros Rodríguez (the son of Rafael Moros and Natividad Rodríguez). Rafael was the son of Faustino Moros.