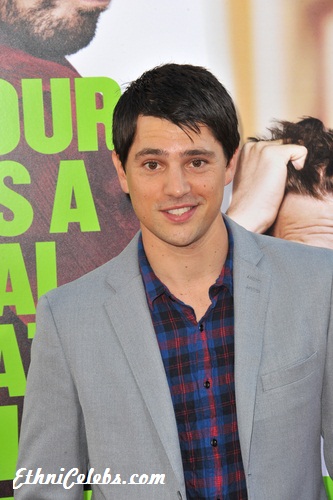 D’Agosto in 2011, image by Featureflash / Shutterstock.com

Nicholas D’Agosto is an American actor. He has had leading roles in the films Final Destination 5, Fired Up!, and Election, among others. He has also been credited as Nick D’Agosto.

His father is of Italian descent, with some roots in Sicily. His maternal grandfather was of Dutch descent and his maternal grandmother had Norwegian, English, Scottish, and Alsatian German ancestry.

Nicholas is married to Andrea Bricco, with whom he has one child.

Nicholas’s paternal grandmother was Josephine A. Bruno (the daughter of Joseph Bruno and Angeline/Angelina Circo). Josephine was born in Nebraska, to Italian parents. Angeline was from Siracusa, Sicily.

Nicholas’s maternal grandmother was Julia E./L. Hanson (the daughter of George Allen Hanson and Rebecca Jane Bursell). Julia was born in South Dakota. George was born in South Dakota, the son of Elling N. Hanson, who was Norwegian, and of Julia Anderson/Rasmus, who was born in Wisconsin, to Norwegian parents. Rebecca was the daughter of Samuel Lewis Bursell and Rebecca Jane Shank, and had English, Scottish, and Alastian German ancestry. Many of Rebecca’s ancestors had lived in the United States since the 1600s, and some had lived in Canada.