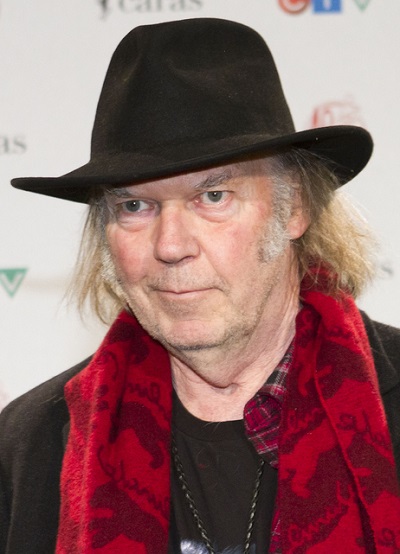 Neil Young, also credited as Bernard Shakey, is a Canadian singer, songwriter, and musician. He is widely regarded as one of the most influential musicians of his generation. He was a member of the super group Crosby, Stills & Nash (& Young), with David Crosby, Graham Nash, and Stephen Stills. He was also a member of the band Buffalo Springfield, also with Stills.

Neil’s paternal grandfather was Percy Andrew Young (the son of John Alexander Young and May Nicole Young). Neil’s great-grandfather John was born in Ontario, the son of James Hume Young, who was born in London, England, and of Mary Ann Gould, who was born in Kingston, Ontario, Canada, to an English father, from Sheffield, Yorkshire, and to an Irish-born mother, from Antrim, Connacht. Neil’s great-grandmother May was the daughter of John Young and Rose Mary Dale, who were from Québec, Canada.

Neil’s paternal grandmother was Jean Ferguson Paterson/Patterson (the daughter of Robert Paterson and Agnes Helen Scott). Robert and Agnes were from Ontario, Canada, and were likely of Scottish descent.

Neil’s maternal grandfather was William Nevison/Niverson Ragland (the son of Waverly Nathaniel Ragland and Lavinia Cargill Blow). William was American, and was born in Virginia. Waverly was the son of Reuben Fenton Ragland, who was of half Colonial American (English) and half French Huguenot descent, and of Martha Lavinia Blick. Neil’s great-grandmother Lavinia was the daughter of Capt. William Nivison Blow and Lavinia Cargill.

Neil’s maternal grandmother was Aime/Annie Perle/Pearl Kenny/Kenney (the daughter of John B. Kenney and Mary “Minnie” Beautram). Annie was born in Kentucky, U.S. John was born in Ontario, Canada, the son of Patrick Kenney, who was Irish, and of Margaret Lawrason, who was from Ontario, Canada.

Genealogy of Neil Young (focusing on his father’s side) – http://worldconnect.rootsweb.ancestry.com

Genealogy of Neil’s maternal grandfather, William Nevison/Niverson Ragland (focusing on his own mother’s side) – http://worldconnect.rootsweb.ancestry.com