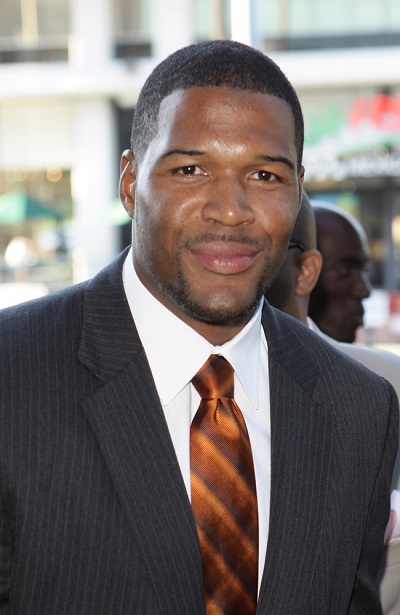 Strahan in 2009, photo by Prphotos.com

Ethnicity: African-American, as well as small amount of English

Michael Strahan is an American television personality and football player. He played in the NFL, as a defensive end for the New York Giants. He was elected to the Pro Football Hall of Fame. He was a co-host of the show Live! with Kelly and Michael from 2012 to 2016.

Michael is the son of Louise (Traylor) and Gene Willie Strahan. He has four children, two with his first wife; Wanda Hutchins; and two with his second wife Jean Muggli.

Michael’s paternal grandmother was Gentie/Gentle Mae Fowler (the daughter of General Major Fowler and Lillie M. Leonard). Gentie was born in Texas. General Fowler was the son of Berry Fowler and Ellen Priscilla Gasaway. Lillie was the daughter of Levi Leonard/Lenard and Louiza A. Holmes.

Michael’s maternal grandfather was James Curtis Traylor (the son of Jeredo D. “Judo”/Jado Traylor and Creola Mead). James was born in Texas. Jeredo was the son of Thomas Traylor and Hannah Armstrong. Creola was the daughter of William A. Bishop and Harriett Mead/Meade. Michael’s great-great-grandfather William was white and Michael’s great-great-grandmother Harriett was black. According to research displayed on the show Finding Your Roots with Henry Louis Gates, Jr. (2019), the couple lived near each other, maintained a relationship for over a decade, and had four children together. They did not marry, which was illegal at the time in Texas.

Genealogy of Michael Strahan (focusing on his father’s side) – http://www.geni.com