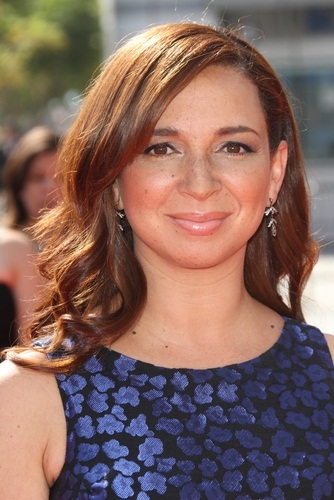 Maya Rudolph is an American film and television actress and comedian. She has appeared in the films A Prairie Home Companion, Grown Ups, and Sisters, and on Saturday Night Live, among many other works. She is the daughter of producer Richard James “Dick” Rudolph and soul and R&B singer Minnie Riperton (Minnie Julia Riperton). Maya’s mother died when Maya was seven years old. Maya has four children with her partner, filmmaker Paul Thomas Anderson.

Maya’s father is Jewish, from a family from Lithuania, Russia, Germany, and Hungary. Maya’s mother was African-American.

Her Southeast Asian DNA link was evidently to Madagascar.

Maya’s paternal grandfather was Sidney J. “Sid” Rudolph (the son of Judel/Julius Abraham Rudashevsky/Rudashevski/Rudolph and Nellie Eliashof/Ellashof/Elishof). Sidney was born in Pittsburgh, Pennsylvania. He was a philanthropist, and once owned all of the Wendy’s and Rudy’s restaurants in Miami-Dade County. Maya’s great-grandfather Judel was a Jewish emigrant, from Vilna, then in the Russian Empire, now Lithuania, the son of Yisroel David/Dovid Rudashevsky and Sora Gordon. He was a haberdasher, and helped found a large synagogue in Pittsburgh. Maya’s great-grandmother Nellie was born in Kovno, Lithuania, to Jewish parents, Samuel Eliashof and Hannah “Annie.”

Maya’s maternal grandfather was Daniel Webster Riperton (the son of George Riperton and Molly/Mollie L. Grigsby). Daniel was born in Hustonville, Kentucky, and was African-American. George was the son of Henriette Lily Meaux, whose parents, John Black Meaux and Lucinda, were born into slavery in Kentucky; their owner freed them and his 59 other slaves upon his death. Molly was the daughter of James Grigsby, whose parents were also born into slavery, and of Delia Crow.

Maya’s maternal grandmother was Thelma Inez Matthews (the daughter of Chester/Ed A. Matthews and Elizabeth/Minnie “Bettie” Grundy). Thelma was born in Holmes County, Mississippi, and was African-American. Chester was the son of John Edward Matthews and Isabella McIntosh. Elizabeth was the daughter of William Grundy and Ella Smith.