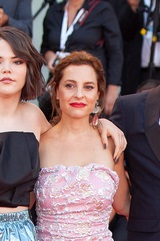 Marina de Tavira is a Mexican actress. She is known for her role as Sofia in Alfonso Cuarón’s 2018 film Roma, for which she was nominated for the Academy Award for Best Supporting Actress.

Marina is the daughter of María Lucila Isabel Servitje Montull and Juan Pablo de Tavira Noriega, who was a criminal lawyer. Her father was murdered, in a crime that has not been solved.

She is a niece of theatre director Luis de Tavira and his Argentinian-born wife, actress Rosa María Bianchi, and a cousin of their children, actors Pedro de Tavira Egurrola and José María de Tavira.