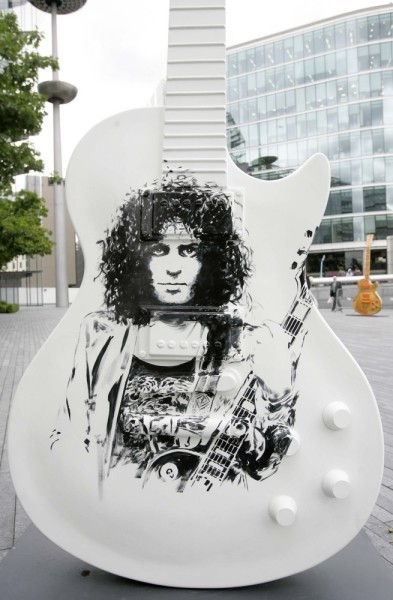 Marc Bolan was a British singer, songwriter, musician, guitarist, and poet. He was the lead singer of rock band T. Rex.

Marc was the son of Phyllis Winifred (Atkins) and Simeon “Sid” Feld, a lorry driver. His father was of mostly Ashkenazi Jewish heritage, with some English and Scottish. His mother was of English ancestry. It is possible that Marc’s mother converted to Judaism. A picture of Marc’s parents can be seen here.

Marc was married to June Child, until his death.

Marc’s paternal grandfather was Harry/Henry William Feld (the son of Jacob Feld and Julia Rebecca Harris). Harry was born in Whitechapel, Greater London. Jacob was a Polish Jewish immigrant. Rebecca was the daughter of John Harris, who was Jewish, with roots in Germany, and of Isabella Fackrell, whose mother was Scottish.

Marc’s paternal grandmother was Betsy Ruffell (the daughter of Arthur Ruffell and Rebecca Solomons). Betsy was born in London. Arthur was the son of John Ruffell and Mary Ann Houghton/Worth/Todd. Rebecca was the daughter of Jewish parents, Isaac Solomons and Catherine Keys.

Marc’s maternal grandfather was Henry Leonard Atkins (the son of William Atkins and Katie Ellen Shipperley). Henry was born in Fulham. Katie was the daughter of Rubin Shipperley and Jane Green.

Marc’s maternal grandmother was Elsie Mary Pither (the daughter of George Pither and Alice Mary/Eunice Elizabeth Sharman). George was the son of William Pither and Caroline Green. Eunice was the daughter of John Sharman and Fanny Cleaver.