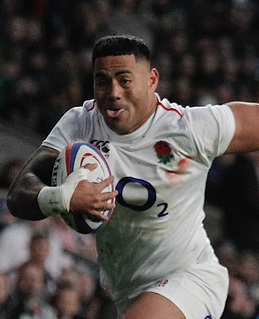 Tuilagi in 2019, photo by sportsphotographer.eu/Bigstock.com

Manu Tuilagi is a Samoan-born English rugby union player. He has also represented the British and Irish Lions.

Manu is the brother of Freddie Tuilagi, Henry Tuilagi, Alesana Tuilagi, Anitelea Tuilagi, and Sanele Vavae Tuilagi. They are all also Samoan internationals and also played for Leicester. Another, born Olotuli, is fa’afafine and goes by the name of Julie.

Manu was named Manusamoa after the Samoan national team, the Manu Samoa. His brother Freddie was selected for Samoa at the World Cup the year Manu was born.

Manu moved to the U.K. with his siblings, where he began playing youth rugby in 2004, while living in Cardiff, Wales.