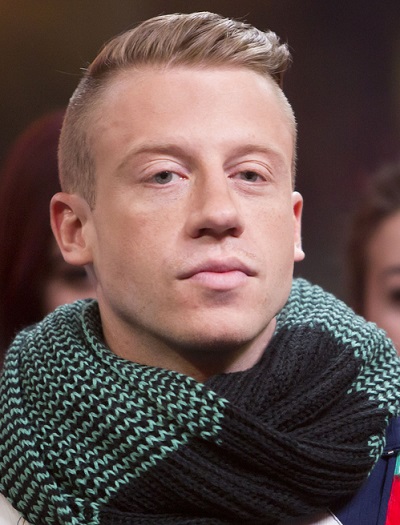 Macklemore in 2012, photo by prphotos

Macklemore is an American rapper and songwriter. He forms the hip hop duo Macklemore & Ryan Lewis, with Ryan Lewis. He is also known as Professor Macklemore.

Macklemore is the son of Julie and William Haggerty. He is married to Tricia Davis, with whom he has three children.

Macklemore’s paternal grandfather was John Edward Haggerty (the son of Timothy Steven/Stephen Haggerty and Kathryn Margaret Kyle). John was born in Massachusetts, and was an army officer and research center administrator. Timothy was the son of John Ambrose Haggerty, who was born in Massachusetts, to Irish parents, with his father being from Cork, and of Mary Theresa Daley, who was of Irish descent.

Macklemore’s maternal grandmother is Helen Rozina/Rosena Marolf (the daughter of Leo Fred Marolf and Frances Mary Hacker). Helen was born in Iowa. Leo was the son of Frederick John Marolf, whose parents were Swiss, of Swiss-German descent, and of Elen/Ellen Windal/Wendal/Windell. Frances was the daughter of Anton Hacker, who was German, and of Rosina/Rosa Marie Huerth, who was also of German descent, with roots in Kendenich, Hürth, Köln, Nordrhein-Westfalen.