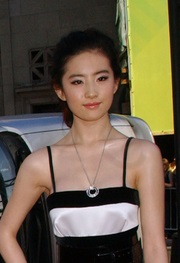 Liu Yifei is a Chinese and American actress, singer, and model. She plays Mulan in the 2020 live action film. She is the daughter of Liu Xiaoli (刘晓莉), a dancer and stage performer, and An Shaokang (安少康), a diplomat and French language university professor.

After her parents divorced, she changed her name to her mother’s name, taking Liu Ximeizi (刘茜美子). In 1997, she and her mother moved to Queens, New York City, New York, U.S. In 2002, she returned to China to act, using the name Liu Yifei (刘亦菲).