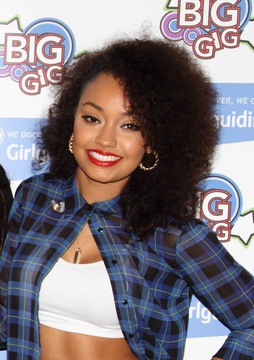 Pinnock in 2013, photo by Prphotos

Leigh-Anne Pinnock is a British singer, songwriter, and fashion blogger. She is a member of the British band Little Mix, along with Perrie Edwards, Jesy Nelson, and Jade Thirlwall.

That is such a personal thing, isn’t it: ‘What do you identify as?’… I do identify as black. I have two mixed-race parents… So I have always identified as black growing up. I feel like I was identified as black in the public eye as well. The public would call me the ‘black girl’ in Little Mix and that’s what I was and I owned it, but it is such a personal thing to say… I get scared to offend people as a mixed-race person [saying] that I identify as black because I know how bad colourism is and how dark-skinned people are not represented enough in the media at all.

A picture of her maternal grandparents can be seen here.