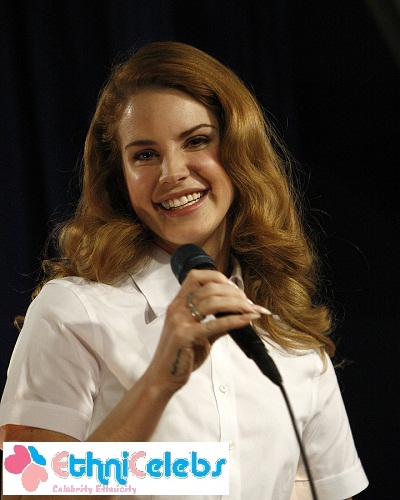 Del Rey in 2012, image via kathclick/bigstock.com

Lana is the daughter of Patricia, an account executive and schoolteacher, and Robert Grant, a Grey Group copywriter and entrepreneurial domain investor. She was raised mostly in Lake Placid, New York. She has said, “…we have our Scottish crest at home, Grandpa does. Bob, and then there’s Davey and Jimmy and Robbie… The family roots are in Lanarkshire and I will definitely be visiting at some point…”

Lana’s paternal grandfather was Robert England Grant, Sr. (the son of Benjamin William Grant and Violet England Rowell). Robert was born in New York, and was an investment banker and venture capitalist. He worked at Kidder, Peabody & Co., and was a vice president for Plough, Inc and Textron. Benjamin was the son of David Stuart Grant, whose parents were Scottish, and of Mary Jane Nice. Violet was the daughter of Morse Rowell and Belle J. England.

Lana’s paternal grandmother is Cynthia Ann Kirk (the daughter of James Wickersham Kirk and Alice Elizabeth Woolridge/Wooldridge). Cynthia was born in Pennsylvania. James was the son of Albert DeWitt Kirk and Minnie Maude Wickersham. Alice was the daughter of Ashley E. Woolridge and Agnes Goodwin Dale.

Lana’s maternal grandmother was Madeline Patricia McClean (the daughter of Joseph McClean and Madeline Montgomery). Lana’s grandmother Madeline was born in Brooklyn, New York. Joseph was the son of William Francis McClean and Anna Veronica “Annie” Delaney, who were born in New York, both of them to Irish parents. Madeline was the daughter of Thomas Montgomery, whose parents were born in New York, and of Mary Butler, whose parents were English.