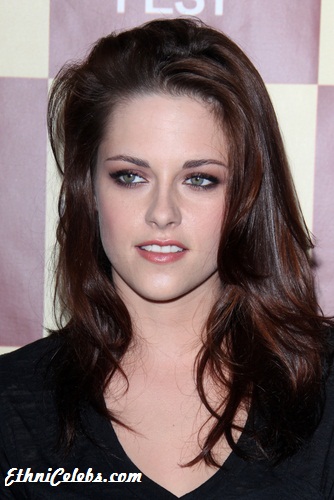 Kristen Stewart is an American actress, model, and director. She is known for starring as Bella in the Twilight films, and for her many roles across both wide and indie releases, including The Messengers, Adventureland, Still Alice, Personal Shopper, Spencer, and Undertow.

Her father, John Stewart, is an American stage manager and television producer. He has English, Irish, Scottish, Welsh, Scots-Irish/Northern Irish, and distant German and French, ancestry.

Her mother, Jules Mann-Stewart (originally Urman), is a script supervisor and director. Kristen’s mother was adopted by Norma Beatrice (Gordezky) and Benny Urman. They were a Jewish couple residing in California, who had married in 1947, and adopted Kristen’s mother in 1953. They also spent time in Maroochydore, Australia during her mother’s teenage years.

A 23andMe DNA test taken by Kristen stated (at 23:30) that Kristen’s genetic ancestry is:

Given Kristen’s DNA results, it is likely that her biological maternal grandmother was Jewish.

Kristen’s paternal grandfather was Carroll Dale Stewart (the son of Alonzo Milton “Lonnie” Stewart and Euna “Una” Pendery/Pendry). Carroll was born in Missouri. Alonzo was the son of Allen Stewart and Rebecca Ann “Becky” Brewer. Euna was the daughter of James E. Pendry/Pendery and Mary Etta Townsend, whose own maternal grandparents were Irish.