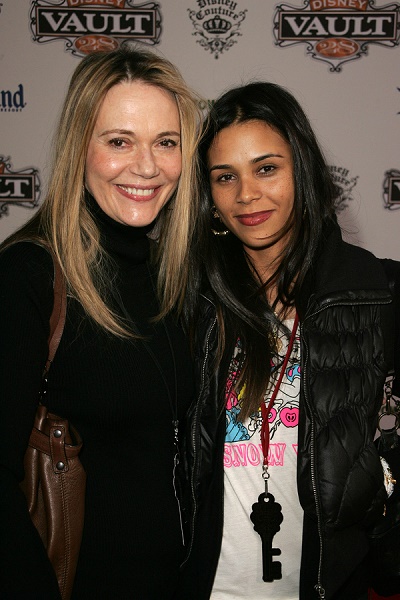 Jones (right) with mother Peggy Lipton in 2006, photo by s_bukley/Bigstock.com

Kidada Jones is an American model, actress, and fashion designer. She is the daughter of music producer Quincy Jones and actress and model Peggy Lipton. She is a sister of actress Rashida Jones and a half-sister of model Kenya Kinski-Jones. Kidada was the girlfriend of musician Tupac Shakur around the time of his death.

Kidada’s father is of mainly of African-American (West African/Central African) ancestry, with some English, Scottish, and Welsh, heritage.

Kidada’s paternal grandfather was Quincy Delight/Delightt Jones (the son of Caesar Jones and Susannah/Susanna Burgess). Kidada’s grandfather Quincy was born in South Carolina, and was a semi-pro baseball player. Caesar and Susannah were both black. Susannah was the daughter of West Burgess and Adele, or of Osborne Burgess and Elizabeth.

Kidada’s paternal grandmother was Sarah Frances Wells (the daughter of Love Adam Wells and Mary Belle Lanier). Sarah was born in Mississippi. Love, who was black, was the son of Nelson Wells and Sarah Campbell. Mary’s father, James Balance Lanier, was white, and had mostly English, as well as Scottish and Welsh, ancestry. Mary’s mother, Cordelia Dickson, was black.

Kidada’s maternal grandfather was Harold Arlen Lipton (the son of Max Lipschitz/Lipton and Alice Goldfarb). Harold was born in The Bronx, New York City. Max and Alice were Jewish emigrants, Max from Slutsk and Alice from Brest, both in Belarus, then in the Russian Empire. Max was the son of Harris/Harold Lipschitz and Rebecca Leah Pitovsky/Witkowsky. Alice was the daughter of Aaron Goldfarb and Frieda/Freude Bass/Bab.

Kidada’s maternal grandmother was Rita Hetty Benson/Rosenberg (the daughter of Hyman Rosenberg and Jeanie “Jane” Benson). Rita was born in Dublin, Ireland. Hyman was a Russian Jewish emigrant, who was born in Saga, Province of Kemerovo, the son of Marko Benjamin Rosenberg and Sarah Hahn. Jeanie was born in Manchester, Lancashire, England, to Jewish parents from Latvia and/or Kaunas, Lithuania, Benjamin Joseph Bensohn/Benson, from Kovno, and Sophia Winestein/Weinstein.

A DNA test whose results were displayed on the show African American Lives (2006) stated that Kidada’s father’s, Quincy Jones’s, genetic ancestry is:

Genealogy of Kidada Jones (focusing on her mother’s side) – http://www.wikitree.com