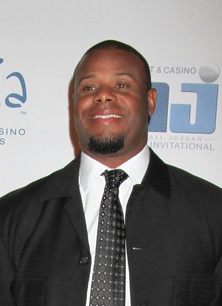 Ken Griffey, Jr. is an American professional baseball player. He spent most of his career with the Seattle Mariners of Major League Baseball.

Ken’s paternal grandfather was Joseph Robert “Buddy” Griffey (the son of George William Griffey and Lula/Louella/Lillian Shepherd). Joseph was born in Pennsylvania. George was the son of William Clark Griffey and Margaret. Lula was the daughter of George Henry Shepherd and Laura Virginia Robinson.

Ken’s paternal grandmother was Ruth N. Bailey (the daughter of John Bailey and Lena Anderson). Ruth was born in Kentucky.