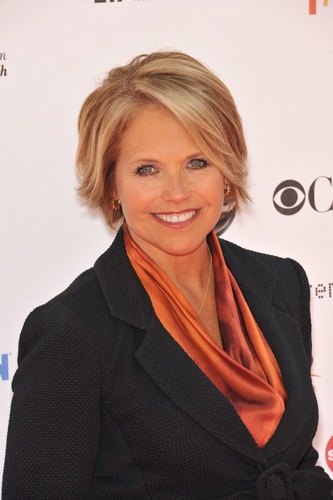 Katie Couric, also credited as Katherine Couric, is an American television and online journalist, presenter, producer, and author. She is known for being a co-host of NBC’s Today. She is active in internet blogging for The Huffington Post.

Katie is the daughter of Elinor Tullie (Hene) and John Martin Couric. Her nephew (sister’s son) is director, producer, and screenwriter Jeff Wadlow.

Katie’s surname is Breton, from France. Katie’s father was of one quarter French ancestry, with his other roots being English, Scottish, and German. Her mother was Jewish. Katie’s maternal grandparents were both Jewish. Their families emigrated to the U.S. from Germany, and Katie’s mother had more distant Czech Jewish roots, as well.

Katie was raised in her father’s Presbyterian faith.

Katie was married to attorney John Paul “Jay” Monahan, until his death, with whom she has two children. Katie is now married to financier John Molner. John is Jewish.

Katie’s paternal grandfather was John Martin Couric (the son of Alfred Alexis Couric and Sarah Sophia/Sopia Shorter “Sallie” McKleroy). John was born in Alabama. Alfred was born in Alabama, the son of French parents, Charles Mathuron Couric, from Lorient, Brittany, and Henrietta Francoise Farier/Farrier Doutre, from Saintes, Charente-Maritime. Sarah was the daughter of Captain William Henry McKleroy/McKlreoy and Martha Gill Shorter. On the Today show, Katie discovered that one of her ancestors was a French orphan who moved to the U.S. in the 1800s.

Katie’s paternal grandmother was Wildie Churchill Hibbler (the daughter of James Edmund Hibbler and Ida Hill Ivy). Wildie was born in Mississippi. James was the son of James Lawrence Hibbler and Mary Ann Amason. Ida was the daughter of Bird Ivy and Caroline Jemima Cockrell.

Katie’s maternal grandfather was Berthold B. “Bert” Hene (the son of Aaron Hene and Matilda/Mathilda E. Meyer). Berthold was born in Iowa. Aaron was born in Bavaria, Germany, to Jewish parents, Wolfgang Hene, from Geinsheim, and Mahle/Mable “Amalia.” Matilda was also a German Jew.

Katie’s maternal grandmother was Clara L./H. Frohsin (the daughter of Isaac Frohsinn/Frohsin and Emma Hagedorn). Clara was born in Alabama. Isaac was born in Brakel, Hoxter, Nordrhein-Westfalen, Germany, to Jewish parents, Solomon Frohsinn/Frohsin and Julia Levinsohn/Levison. Emma was a Jewish emigrant, from Giershagen, Nordrhein-Westfalen, Germany, the daughter of Abraham Hagedorn and Clara Rosenbaum.